It slices. It dices. It juliennes.

With all due respect to Ron Popeil, so does a knife.

I am not a proponent of kitchen gadgets. Typically they take up too much room in my kitchen and perform a limited number of tasks.

Yet sometimes you find an infomercial gem that amazes and delights with quality and functionality — like the knife my mother-in-law sent me one Christmas. I don’t remember the exact brand but it was advertised to cut a tin can and still slice a ripe tomato. And it did. It also sliced just about everything else with ease including fresh, soft bread. That knife was no one trick pony.

Look here. I use it and it doesn’t heat up my kitchen!

That all ended about a year ago.

We were at the lake with friends and caught a small amount of fish. I wanted to fry up the freshly fileted pieces but didn’t want to create a mess and stink up the house by frying indoors. About then, I remembered the electric skillet in the bottom of my cabinets.

We pulled out the skillet and set up what can only be described as a Red Neck Outdoor Frying Station. To build your own, you’ll need:

That day — the fish, that pan, and those red necks — was the beginning of a love affair with a gadget.

We whip out that pan to fry fish and bacon, to cook up pancakes and scramble eggs, to saute vegetables and grill cheese sandwiches, and to make BBQ meatballs (yum!). We often have to wash or rinse the skillet out multiple times during a single meal prep to cook up several dishes.

Our friend, Tom, coined the phrase, “The miracle that is that pan” after using our skillet several times when he and his wife, Christine, visited us at the lake. Tom and Christine are avid campers. They admitted making a deliberate trip to “the Walmart” to pick up their very own pan to keep in their camper. And guess what they discovered…

Look here. We use it and it doesn’t heat up the camper!

Added bonuses of “The Miracle That Is That Pan” : 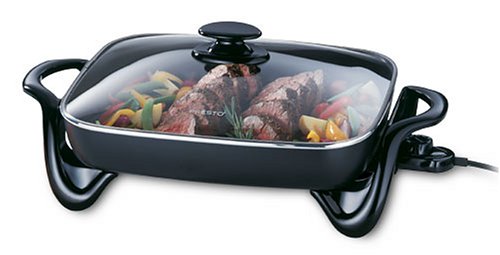